To retain mindspace, managers must tread the fine line between cloying sympathy and genuine empathy

Globally, the response to the Covid-19 pandemic has, in most countries, been a lockdown of nearly all economic activity and shelter-in-place rules. In this environment, the hunker-down, increase share-of-voice strategy of previous recessions is unlikely to work, for the following reasons:

Loss of output: Previous recessions saw a slowdown in production, but not the kind of wholesale loss of output induced by the lockdown. The International Monetary Fund (IMF) estimates that globally, the loss of output in 2020 will be 300 times worse that caused by the recession in 2009. This, the IMF estimates, will translate to an output loss of $9 trillion. Just for perspective, this is equal to the entire nominal GDP of India in 2019 being lost three times over.

Loss of livelihoods: Over 20 million non-farm jobs have been lost in the US since the onset of the pandemic. In India we saw the mass uprooting of workers. Estimates vary, but the order of magnitude of workers heading back to their home states exceeds 20 million. While many of the jobs may come back, some industries are likely to be scarred by long-term damage. With continuing travel restrictions during the pandemic, it is very likely that people are going to be re-thinking the idea of week-end getaways or vacations, with a huge impact on the holiday eco-system of travel, hotels, travel guides, and related sectors. In the event, not only would an airline pilot be out of a job, but also a local travel-guide, not to mention the local dhabas and restaurants that cater to tourist traffic.

For those fortunate not to have lost their livelihoods, both individuals and businesses, they have to learn to live with less than before. In the case of the former, where jobs are still available, salaries have been slashed by up to half, and businesses have to make do with lower revenues.

Fear of the unknown

These losses, coming on top of a potentially life-threatening disease, have understandably led to a deep fear that has been further fuelled by the hysteria surrounding preventive measures to be taken, the daily rising graph of infections and death, the petty squabbles between politicians and civil servants, and varying medical opinion. 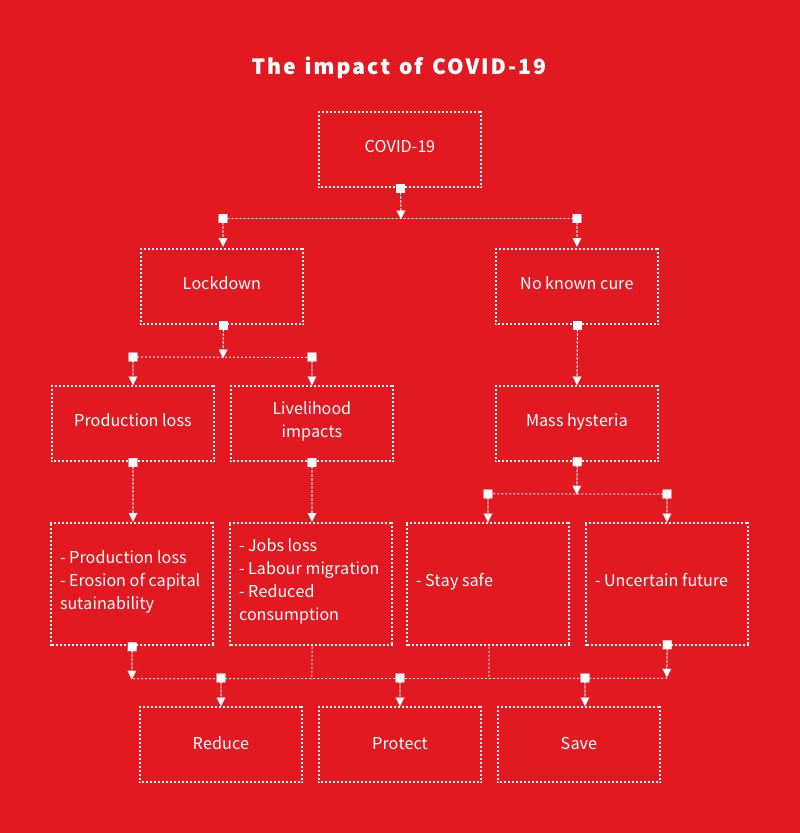 Quite apart from the significant impact on the economy and the environment, several experts have said that situations such as the lockdown and long work-from-home stints could lead to deep-seated neurological stresses, affecting one’s idea of self-worth. The impact of all this is as yet unknown, but is something to consider.

The natural response of people, whether businesses or individuals, is to reduce their current consumption, protect their present conditions and increase their savings to cope with an uncertain future. This is why the spend-your-way-out-of-recession model, which was the response to previous recessions, is unlikely to work now (see flowchart).

Brands and consumers in current times

Brands thrive when people are happy with their present circumstances and look forward to a rosy future. This is the oxygen that enlivens brands. Covid-19 has not only depleted the oxygen of those it infects, but also sucked out the oxygen that fuels brands. So, the first thing brands must recognise is the new reality facing consumers, and forsake their usually strident posturing for a more muted and empathetic tone.

Does this mean brands should stop advertising? After all, the entire supply chain is in a mess and product availability on the shelves is challenged. In the event, it might seem pointless to advertise. That would be a wrong assumption. One, quite simply, ‘out of sight is out of mind’ and when normalcy returns, the task of retrieving consumer mind-space will be much harder. Second, studies conducted during other recessions show that brands which sustain their presence in the consumer’s mind not only thrive post-recession, but also pick up market share.

Therefore, to ride out the pandemic it would help brands to have a framework for how consumption is likely to be affected, both while the pandemic is raging and in its aftermath. One such framework could be to plot where one’s brand is on the classical paradigm of needs and wants. ‘Needs’ are typically physical and can be experienced by the senses, ‘Wants’ are more nuanced and are perceived, rather than felt.

Thus, one could define needs as

Utility, to describe basic needs for a human to live as a social animal

Hedonistic, to describe a need that requires greater level of comfort than basic needs and wants as

Security, to describe a base level of quality assurance that the product will work as it is advertised

Badge, to describe a desire of the consumer to be distinctive 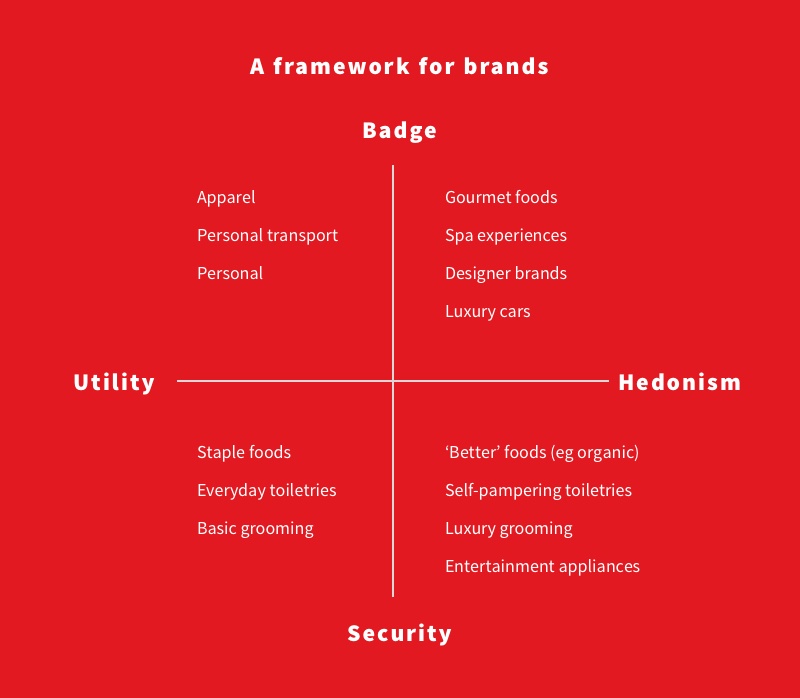 This diagram shows how such a juxtaposition of needs and wants would look with the kind of product categories that may belong to each cluster of needs and wants. Consumer needs and wants have probably not changed, even in these times. However, what has probably changed is their desire to downplay conspicuous consumption.

The key for brand managers, therefore, is to use the framework of ‘needs’ and ‘wants’ appropriate to the overarching factors driving consumer behaviour. For example, it is unlikely that a consumer would splurge on a gourmet meal when they are doing the dishes between video calls, while they are working from home.

So, what should brands do?

The temptation for a brand in these times is to either wear the pandemic on its sleeve and attempt to showcase its pandemic alleviation properties or be cloyingly sympathetic in claiming to share the consumer’s burden. Neither approach will win points, as consumers will easily see through the ploy.

On the other hand, a business-as-usual approach is unlikely to deepen bonds with consumers either. To make genuinely deep connections brands would need to empathise with people as they go through the humdrum tasks of getting through the new-normal of pandemic-induced living — lockdowns, wearing masks, sanitising, social distancing, doing household chores, and so on.

Two outstanding examples of this approach are the advertisements for Nike and Barilla, that are doing the viral rounds currently.

Nike’s recent ad is an outstanding achievement in editing, where the ad agency, Wieden+Kennedy, reportedly went through 4,000 sporting events to weave together this brilliant sports montage.

Carola and Vittoria, two teenagers from Finale Ligure, in Italy, found a novel way to play a ‘socially distanced’ tennis match in lockdown times, each playing from her own roof. Roger Federer surprised Carola and Vittoria while they were giving an interview, and the girls played an unusual match against him under the sunny Italian sky. Pasta-maker Barilla scored a winner here.

Indian admakers have come up with their own films that are in sync with the times. This recent commercial from Nescafe highlights the way many of us have had to step up in our lives amid the new normal.

Brand managers should be aware that in these times consumers tend to constantly choose between ‘need-to-have’ and ‘nice-to-have’. Inevitably, the pendulum will swing in favour of the former, given current exigencies. Marketers have to make sure that they do not, by word or deed, make consumers feel bad about what they have chosen, as the blame will inevitably be on the brand.