Statista, a leading provider of market and consumer data, estimated that digital advertising spends in 2017 were USD 266.24 billion. This was nearly 50% of advertising across all media. In itself, this is a spectacular achievement considering that the Internet itself came into existence a mere 23 years ago. 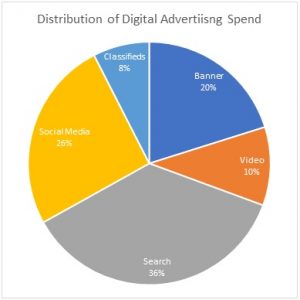 Quite obviously this has been fueled by the near ubiquity of mobile telephony that has aided the rapid penetration of the Internet. Yet, this is only one part of the story. The other part of the story is the diversity of advertising formats Internet has made possible. Consider television – advertising in television is limited to the sometimes interesting, often irritating, commercial which intrudes on the viewers consciousness. In newspapers, it is the display advertisement mostly, and sometimes the classified advertising. Digital advertising, on the other hand is an eclectic mix of process – search, display; devices – desktop, mobile and hybrid; media types – mainstream, social, portals, eCommerce; formats – text, graphic, animation, video. As much as the rapid penetration of the Internet, it is this multiplicity of advertising opportunities that has probably enabled digital advertising capturing nearly half of all the advertising dollars being spent.

As the chart alongside shows digital offers a much more diverse array for the marketer to choose from.

One aspect of the trackers is to improve consumer response to advertising. The other aspect of such trackers is to improve the efficiency of the process of advertising buying itself across the entire cycle of advertising buying and placement, through a process called programmatic advertising. The heart of programmatic advertising is an exchange. Two types of exchanges exist. The supply side exchange where media owners place their inventory of advertising space and advertisers, using the data provided by the trackers, choose the best advertising opportunity for them. The demand side exchange is where advertisers place their advertising requirements (audience type, budget, results desired, etc.) on the exchange and media owners fulfil these demands. Thus, like any exchange, programmatic buying matches buyers and sellers of advertising space so that the former can economise on their budgets, while the latter can maximise the inventory they have to sell, and, at least in theory, both can live happily ever after!

No discussion on digital advertising can be left only to these, however, without including eMail and content marketing. Both are effective complements to digital advertising and work across the consumer’s buying cycle. Literature on the effectiveness of these is divided. Whatever the merits of the argument of either side, any marketer who has these in his advertising arsenal only benefits with them and should include them, with the caveat that any weapon is only as effective as it is used. Scattered aimlessly, the results will be hit and miss; well-aimed with laser focus, the results can be spectacular.

Given this diverse array of tools, it is quite possible to be confused on what to use when. It would help marketers to match the digital marketing tool to the consumer behavior they are trying to influence. A guide to choosing the right digital advertising method is shown below:

With digital platforms becoming more ingrained into consumer life-styles, digital advertising still has considerable head-room to peak. Together with newer innovations like wearables and home assistants like Alexa, Apple TV, etc., the cyberscape for digital advertising will likely only expand and a more exciting marketing future awaits the marketer.